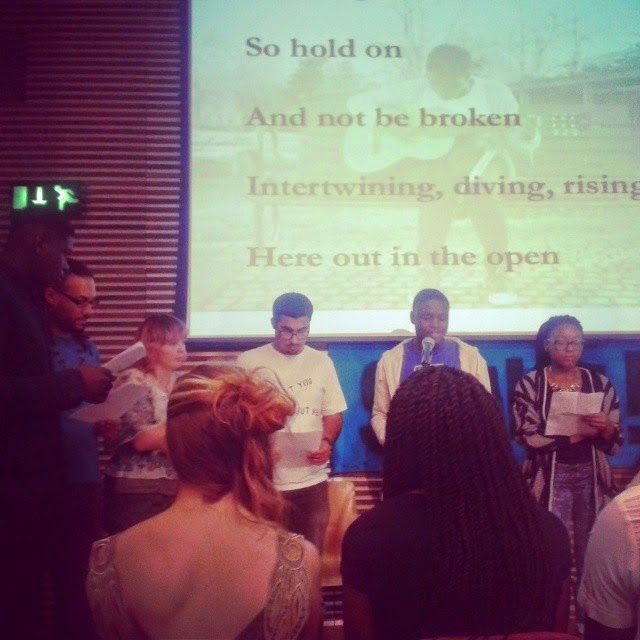 Last Thursday 26th of June we held our fourth Shake! showcase at Free Word Centre. Shakers present and past got together in an amazing line up of poetry, fiction, music and film, targeting pressing social and political issues.

The weeks prior to the showcase were intense. We had planning meetings, rehearsals, worked on our poetry and music, and practiced our performance skills. We also got together to think about what we wanted people to take away from this. We decided we wanted the audience to feel energised, inspired, and to realise they could be change-makers too.
The showcase was an opportunity to share some of the work created during the 4th Shake! course last February at Stephen Lawrence Centre. For five days we took part in intense discussions and art making sessions around the themes ‘Remembering, Re-imagining, Reparations’, challenging official narratives and stories, and thinking of ways to transform ourselves and the structures of society.

The event, hosted by Lateef and Grainne, featured powerful poetry by Christianah, Onysha, Selina, Mujtaba, Zena, Umaru, Orla, Sai, and Annie. We were also lucky to have Heritier and Marcina on the music front, a short story by Orla, and a long-distance video poem by Maaike all the way down in the Netherlands.

Last but not least, the showcase saw the premiere of ‘Remember’, a short poetic film by Michelle, Mujtaba, Grainne, Isi, Edwina and Tasnima, who worked in partnership with Patrice and Dershe from Nuwave Pictures.

The 4th showcase was a 2 hour taster of what we do at Shake, packed with powerful performances, shared stories, and passion for change. Here are some of the comments from our audience, who shared with us their experience: 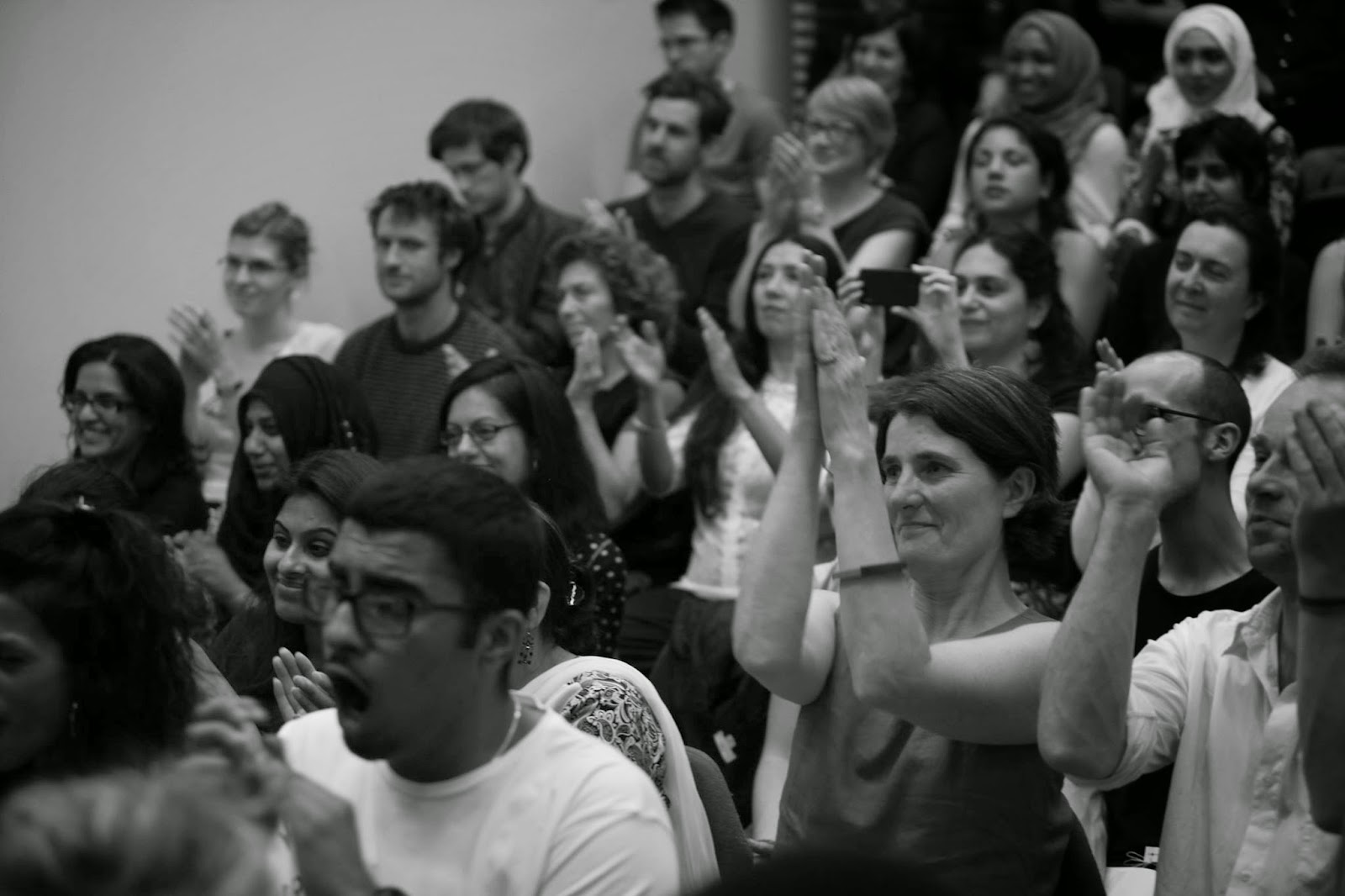 Emotional, empowering, the themes of positivity, strength of voice… You are all amazing ! –

The singing, the stories of individuals and people their voices and minds are powerful “AMAZING!”–

I’m still digesting and contemplating the wonderful work I saw in the showcase. Many congrats again.–

Our next Shake! Course is in August 18th-22nd. For more info on how to apply email farzana@platformlondon.org.
at 15:59 No comments:

With our 4th Shake! showcase just 2 days away it's our pleasure to profile two of our special guests and former Shake! participants Annie Rockson and Onysha D Collins.

Since their attendance at last year's intensive Shake! course at the Bernie Grant Arts Centre (Annie was also a participant on Shake! at the Stephen Lawrence Centre, August 2012) it has been a pleasure to witness the poetry/activist pow of Annie and Onysha go from strength to strength.

A sample of their recent appearances includes: supporting the King of Afrobeat (Tony Allen) at Numbi's Afro-Disco event; perfomance at the launch of the Huntley Biography project, War on Want: The New Frontlines of War; African Uprisings; Live Art Development Agency' 'I hate America (I love America)'; Let Freedom Ring! The People''s guide to Popular Education and Freedom to name but a few!

In addition to all this, both poets are also developing educational work: Annie is currently working on a self-help book for young people - highly relevant to our next two Shake! courses focusing on well-being and healthy eating - and Onysha has just returned from Dominica where she is making first steps towards developing an Afrikan-history based education project.

Here's a sample of their latest videos and of course - don't miss the chance to catch them LIVE! alongside the wealth of other Shake! talent at #ShakeShowcase #4 this Thursday at the Free Word Centre 6-9pm. 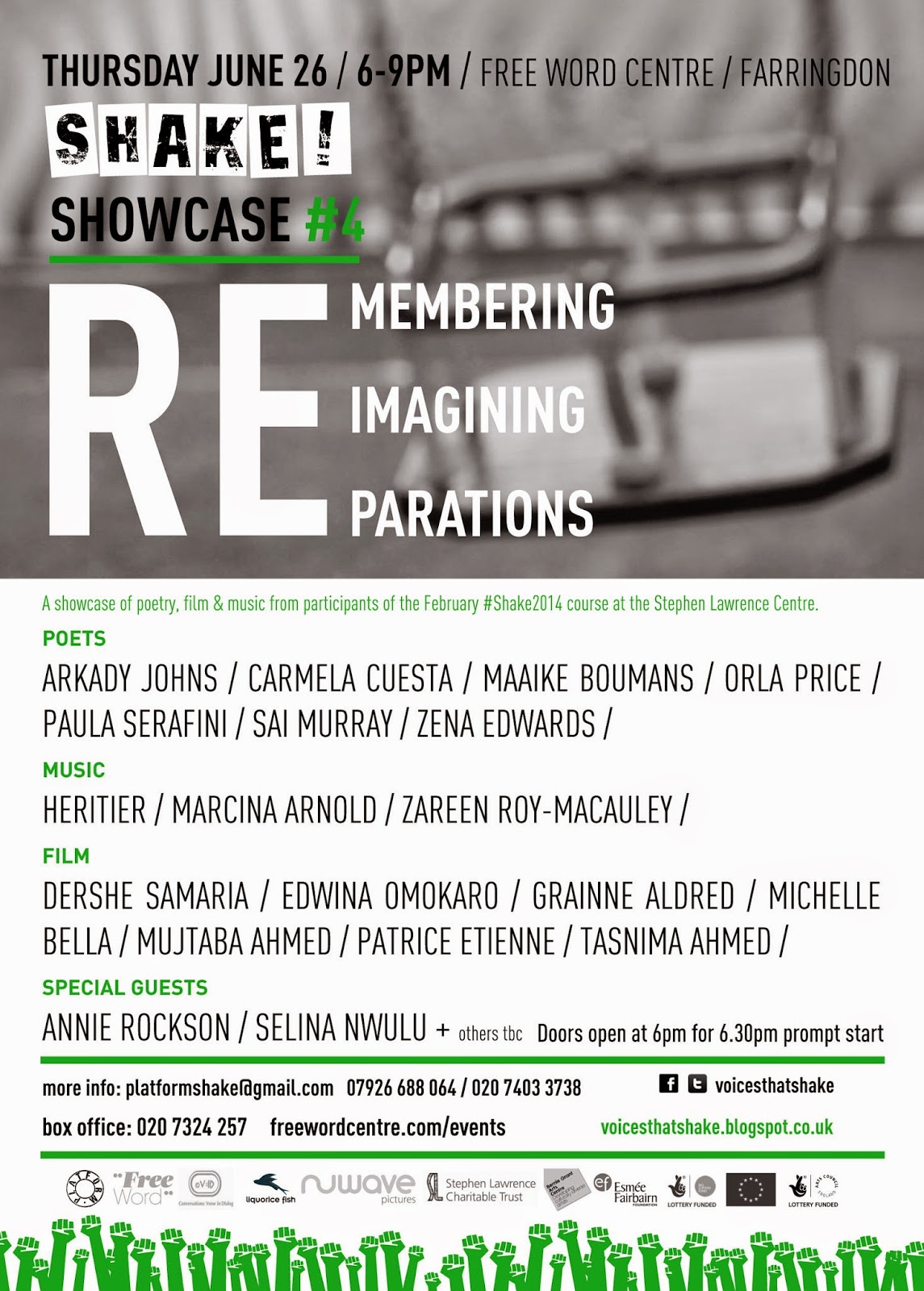 An explosive showcase from the participants of the fourth Shake! course. 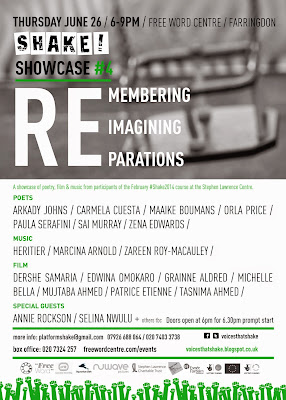 An explosive showcase from the participants of the fourth Shake! course. Featuring freshly created poetic, filmic & musical responses to injustice from:

Watch below a little taster of the poetic film,   which will be premiered during the showcase.

Online Ticketing for Remembering, Re-Imagining and Reparations powered by Eventbrite 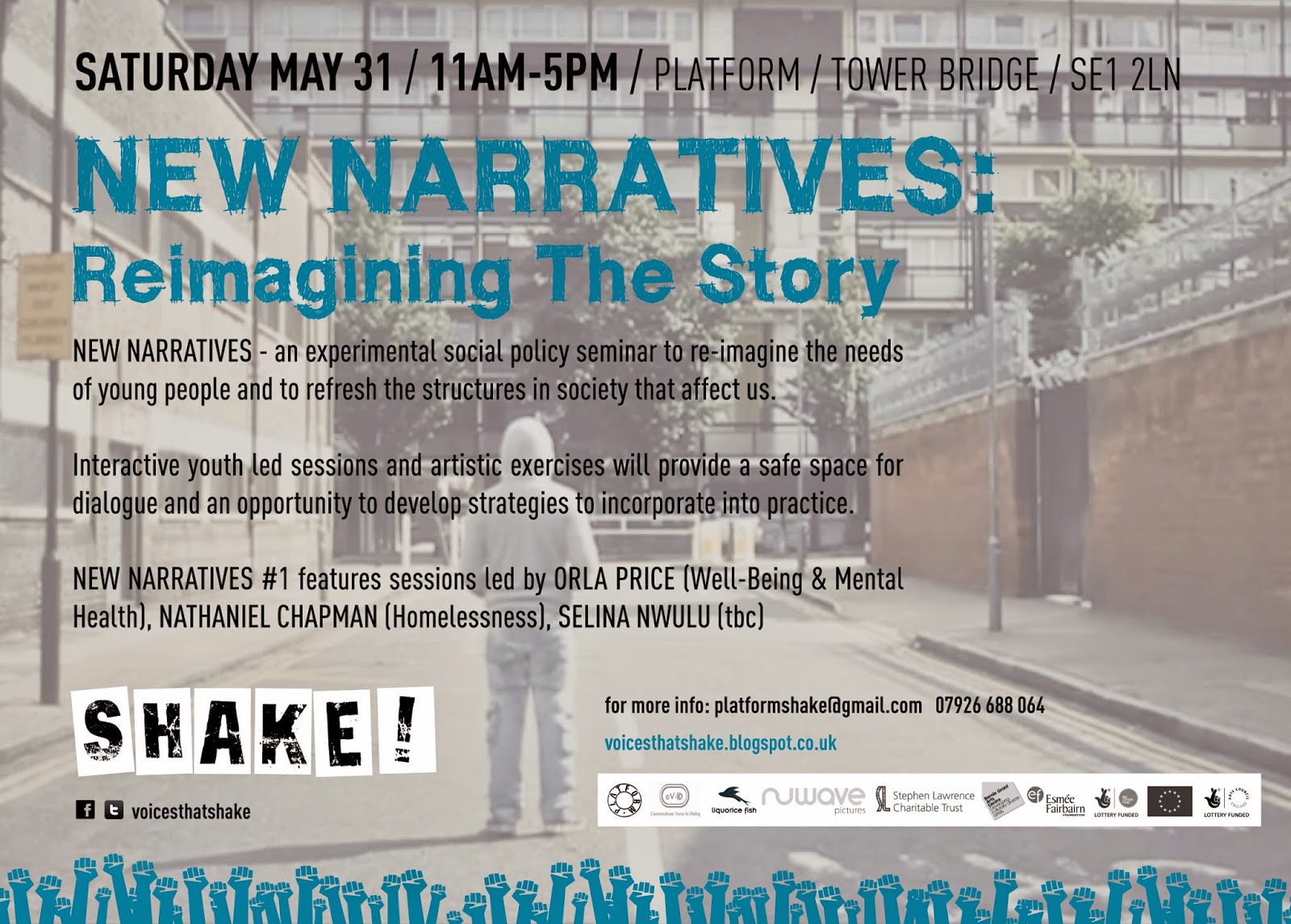 For four months, we at Shake! knocked about the idea of what the content for our “Social Policy seminar” should be. We rigorously discussed how it should function as a tool for change.


It only came to light after two months that we had an  issue with the title - social policy seminar. Not because we didn't know what the words meant, or what they all meant placed next to each other, it was that, for us the term didn’t quite fit Shake! as a concept. Shake!’s mission is to address the experience the Shake! young people would have with our invited policy makers, youth service providers and
educators. 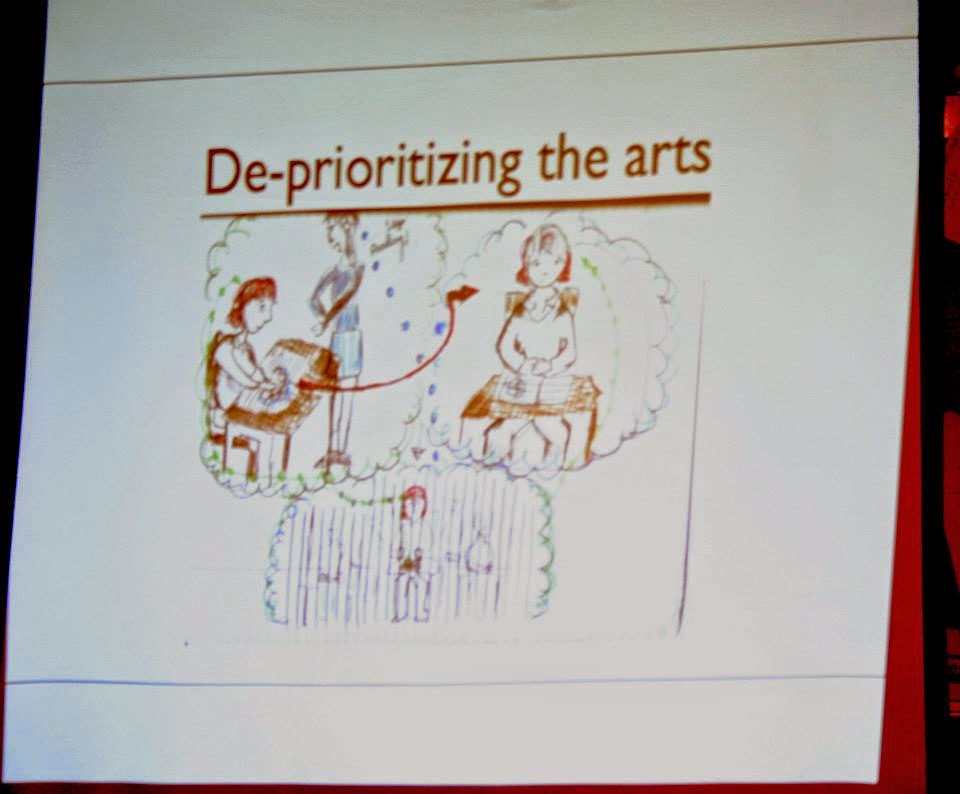 All of us have engaged with sessions before, where they are quite dry with speeches and some discussion. We found that by calling our sessions ‘social policy seminars’ we fell into a scripted pattern of speech and dialoguing forms that limited how Shake as a project sought to refresh discourse about the needs and voices of young people. It was Farzana who said, “we are trying to create new narratives” around how young people are provided for by including them in important conversations, where it matters. And that was it! Everything fell into place - we decided to use the term and title ‘New Narratives’ when referring Shake’s the “social policy seminar” sessions.

How do we create New Narratives? By investigation, interrogation and
by being reflective and innovative. 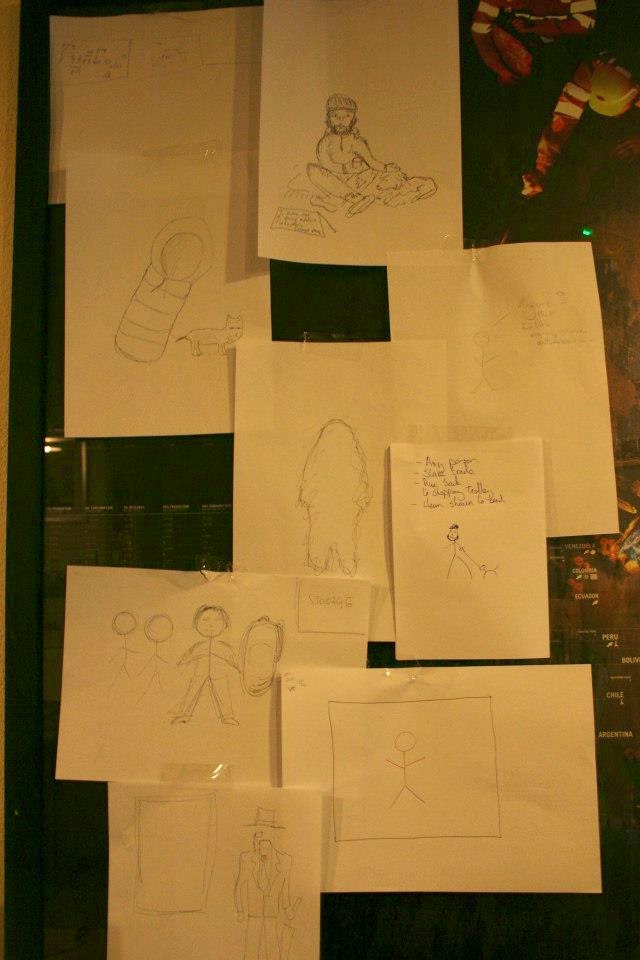 Shake! uses creativity to take a immersive and deeply resonant journey into themes of race, class and generational inequality, power and it made sense to stick to it. We use creative tactics to unpack and reveal the underbelly of the injustice and inequality; we use memory and brainstorming to re-imagine the alternative to the systems we live by today. Through a collective artistic experience, we immerse participants in to the issues we are discussing. Why do it differently?

So we advised the Shake!rs who showed keen interest to practice workshops they had tickling the backs of their minds to be as creative as possible based on what they had experienced in the Shake! intensives August 2013 and Feburary 2014. They took up the gauntlet to facilitate dynamic interactive and participatory sessions around the youth vote and race representation,homelessness, mental health and well-being in education.

Over a period of a week Nathaniel Chapman, Layan, Orla Price and Khafi Kareem came to the Platform office for training days with the core team, here we merely acted as sound boards for their session ideas. It was exciting for us to see how they had already thought of some very innovative techniques that involved sketching, writing, and creative prompts  for discussion around the sensitive and weighty issues they picked. It was a pleasure to witness and be a part of, as they had evidently done so much work before hand, knowing this was not only an opportunity to express but to educate and lead in a way that was enabling for them. 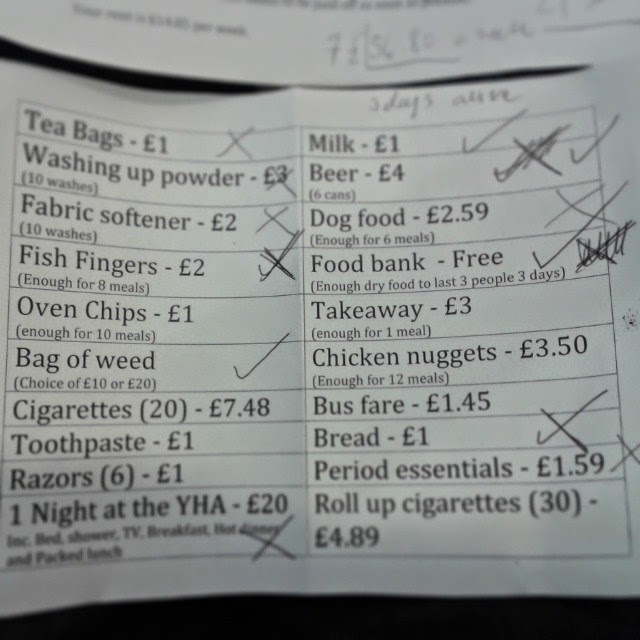 Nathan and Layan brought an inspiring session, asking all involved to challenge their perceptions of homelessness by sketching what we thought it looked like, asking us to embody different types of homelessness sitautions and then making us budget our money in those situations accordingly.

It was interesting to see how many of us, though not all, when asked to sketch a homeless person, drew an old man with a dog. No one thought to trace out sofa-surfing, how young people relying on friends to put them up for a period of time, is a form of homelessness. No one thought to sketch those hidden in homelessness discourse because of their racial backgrounds, where domestic issues are not really generally spoken about publicly. Few of us thought to scribble images of homeless young women who were at risk on the streets because of gender based violence and abuse.  Did we even consider those who had roofs but were constantly under threat of emotional and violent abuse with no support in those ‘homes’?. We had to stop, think, re-configure our consciousness. 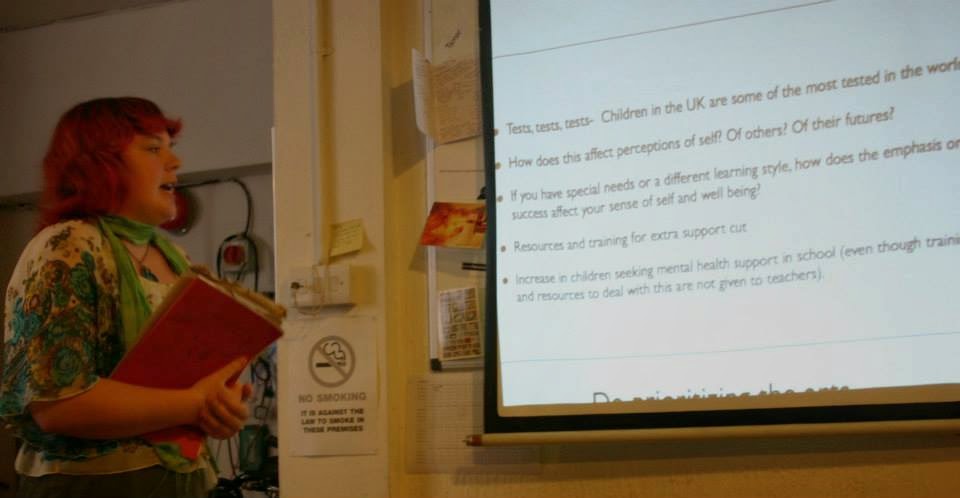 Orla delivered a brilliant back-to-front poem about a boy who loved school finding himself ostracised by neglectful parents scorning his educational vigilence – “don’t worry, he’ll grow out of it.” Teachers were fed up with his studiousness - “why are you trying so hard?” And friends couldn’t understand why he’d prefer to do homework rather than party. Eric, The Boy Who Loved School was eventually institutionalised for doing everything right. We critiqued the story and began a discussion exploring well-being in education. How testing, exams, and job prospects are pressures creating so much anxiety and impact our well-being.  We examined how societal conditions and capitalism are making us physically and mentally unwell.

Khafi gave a very sophisticated and insightful account of her experience as a young Labour party candidate, what it was like to campaign and how people responded to her as young woman of African descent who was so into politics, she bravely ran as a political candidate in the last elections. Regardless of whether or not you believe in the voting system, Khafi’s interactive group activity got us thinking about political education for young people and giving them the opportunity to truly play a part in our world, rather than accusing them apathy. 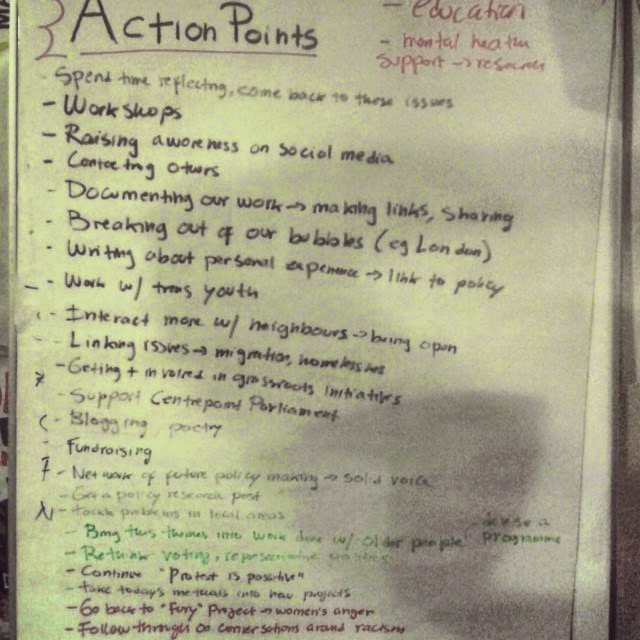 The New Narratives day proved to be very worthwhile investing in as a concept. We, as the Shake team, took a back seat and only contributed to the day with a short free-flow writing exercise to highlight our role as being bridges between the generational methods of engaging with policy making and the needs of young people. The free flow lead into an “actions list”, personal ‘to-do’s” by those attending, influenced by what had been learned on the day. Following this we had a session on direct actions, where each attendee pledged to 3 bold steps they would take in their work  or practice to engage and implement what they had learnedand  experienced in the sessions that day.

We received glowing feedback from participants and youth-facilitators and now we are  even more excited to start this journey into creating new narratives. From there engaging our new narratives in policy design to restructure, even re-imagine society.

“First of all I think the idea of an 'experimental social policy seminar' is great. I really loved the mix of creative experminentation/dialogue and presentations. I thought the contribution from Orla, Nathaniel and co were great. The presentation/mini session about homelessness was great in shifting our preconceptions about homelessness and who it affects. The fact that the two leaders could speak from experience about the subject made it all the more effective, tangible and real....I'm really glad that a programme like Shake exists within the current cultural landscape, as I think the landscape is in dire need of politically engaging, bold, imaginative and sustained youth focused programmes such as Shake.” John Pinder

"The New Narratives social policy seminar blew my mind. The sessions led by Shakers on homelessness and youth political engagement in the UK influenced how I'm framing our public campaigning around energy democracy and fuel poverty in the coming year. Those leading the workshops were incredibly articulate, and had planned an impressive participatory programme" Mika, Platform