Back in June, Platform, Leeds Young Authors and University of Leeds academics from the MA in Activism and Social Change put in an application to the ESRC Festival of Social Science 2011.  Unlikely context for Shake you think?? Well, talking with Shake's Simon Murray who also works with Leeds Young Authors, we realised that Shake! and LYA are in fact not just doing 'social science' but creating it.  The two groups of creative young people have loads of analysis, loads to teach the world about Britain's rough justice and countless injustices, north and south. On top of that, another incredible step in the search for justice for Stephen Lawrence had just been announced: a re-trial of two defendents due to start in November 2011, testament to the extraordinary determination of Doreen Lawrence. The Festival was also a great opportunity to have conversations with Leeds' radical academics about the work.
What with the chance to get Shake! out of London and in touch with an award-winning group of young power-writers from a great Northern city, we decided to go for a slice of the cash.
Then we heard we got the money....

On Sunday, various Shakers were revelling in "Community is Home", UpRise's 2011 Festival happening across 14 venues in Dalston, Hackney. The day was bright and warm, and the vibe was fantastic.  Boris Johnson's decision to remove funding from the original "Rise" Festival did not deter the many committed individuals and organisations from making this incredibly important festival happen for the second year running. Huge noise for Paul Richards and the team..Yay!
From hanging out in the Eastern Curve Garden eating stone-baked pizza among the vegetable beds...

What is Shake's 'Continuity Programme'?

So, the unique thing about Shake! is that each course is followed by a programme of support, training and serious opportunities for young Shakers. We call this the Continuity Programme. The artists, Platform and Shakers are always on the look out and share information.  This leads to a lot of activity... And more and more, Shake! is also on the wanted list for lots of initiatives, generating more opportunities than we can take up.

Mentoring, Training and Networking
- 3 separate trainings with the young people on Fundraising, Communications, and Social media, held in Platform and facilitated by Shake's artists and Platform.
- Creating a Mission Statement together - what's it for, why it's needed, how to get it right.
- the artists and Platform acting as mentors through formal meetings at Platform, and one-to-one contact by email or phone.
- Regular general communications sustained through email, blog, FB, Twitter and newsletters.
- Shakers are self-accessing blog, drafting and publishing the newsletter

Opportunities and Career Development
For our first year out, there were also masses of opportunities for Shake! participants, learning and working alongside Shake's artists and Platform:

- 2 young people were subsidised by a Platform bursary to participate in a course "Women, Creativity and Dissidence" run by writer Nawal El-Saadawi at Goldsmiths, Nov 2010, organised by African Writers Abroad.
- 3 young people were ambassadors for Shake! and Stephen Lawrence Charitable Trust's launch night "Switch On", 17.2.11, meeting and talking with over 100 people about Shake!
- 3 young people from Shake! were videographers on "Afro 1" at BFI and "Afro Too", both Railroad 7 showcases celebrating a Black Cultural Leadership (BLC) programme, held at the BFI in March and RSA on 30.3.11, supported by Shake! artist and BLC award winner DJ Eric Soul.
- 1 young woman performed with Apples & Snakes for the first time (July 2011).
- 2 young people performed at the UpRise Anti-Racist Festival fundraiser "UpRise Live" at Proud Galleries, Camden, 31.5.11, supported by 2 Shake artists
- 1 young man, training to be an architect, has taken up volunteering at Stephen Lawrence Centre and will be speaking at a major event there in the Autumn
- 2 young women took part in weekend creative workshops for women called "Travelling Light" 24 & 30.7.11 a project by Shake! artist Zena Edwards

There's more coming all the time.

Shake! participant Samia Aziz reflects on her experience during Travelling Light, run by Shake! artist and facilitator Zena Edwards
Over the 24th and 30th July, Zena Edwards facilitated two exciting and fun-filled days of discussion, debate, creativity and writing around the issue of female identity. The aim was to unpack the baggage we, as young women, have bestowed upon us from a very young age. A group of young women aged between 17 and 46 worked together over the two weekends, answering the fundamental question: “Why does my gender hold me back?”
The first session consisted of writing, meditation, talking and drawing time lines. In the session, we spoke about things and memories we hold dear, specifically as women. We shared experiences of feeling targeted and intimidated by the media, and made full use of and enjoyed the range of ages in the room! Together we made a timeline which showed how some experiences are specific to some ages, while at the same time celebrating those we all share. One of the most moving parts of the workshop was a session of meditation, where each participant was asked to take on the emotions which we possessed at different ties in our lives: our childhood, adolescence, and those we hold now. While this was a very deep and intense task, the feedback from individuals was heartening and enlightening.

In between the two workshops, there was a six-day break where we were encouraged to micro-journal. In short, this was so we would develop a habit of recording our thoughts and feelings, or those things, which particularly struck us. We were gifted with small notebooks, and encouraged to write a little everyday, or draw or take pictures.

We met again 6 days later, eager to share our thoughts and feelings. The final day of workshops consisted of the sharing of stories, wisdom of our loved ones and lots of laughter. We sat admiring the lives of cats and toddlers, who seem so unaffected by the world around them, and can just “be”. There was ample opportunity for creativity, with people writing and scrap-booking.
The workshops were an incredible opportunity to take some time out of the usual busyness of life and explore issues very personal to us. It’s amazing how something can have such a big impact on your life, and you not realise.

Youth, Media and Riots - we need to hear from you! 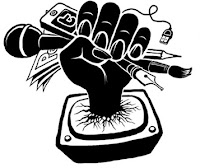 Shake! is very excited to be part of the Rebellious Media Conference, which will be taking place in Central London on 8-9 October. The event will feature speakers such as Noam Chomsky, John Pilger and Laurie Penny and will bring together writers, activists, journalists and students, to raise rarely asked questions about the relationship between the mainstream media, power and democracy. These people are seeking, or making, their own forms of rebellious media.
Shake! will be hosting a workshop on the civil unrest of 6-10 August, titled 'The Unheard: Youth, the "Riots", and the Media'. While there has been an outpouring from the media around these events, very little of this actually takes into consideration the views of young people – despite them occupying centre stage. Moreover, the media seems to present every young person as the same, ignoring the uniqueness and individuality of every person and different social contexts in which events took place. So let us hear from you! Fill in our online questionnaire and tell us what YOU think about the civil disturbances, and in particular how the media portrayed them. And please circulate it to others!
Youth, Media and the Riots survey
at 16:56 No comments: