Shake! is a 5-day intensive course for 16-25 yr olds, consisting of creative workshops designed to equip them with the tools they need to fight oppression and build campaigns in their communities. Through various art forms - poetry, filmmaking, music and zine-making – and in an environment in which oppressive ideas are deconstructed and established methods of thinking are challenged, our group of young activists empower themselves to do great things. The art produced in the short period is always of immeasurable strength and quality, that could only be a product of a sharing space in which the content is highly educational and at times, highly personal. The topic we tackled this time was food - something unavoidably close to home. It was certainly going to be eye opening.

It is near impossible to get by without engaging in the food industry at some level, especially for young people living in inner-city areas like London. The illusion of ‘choice’ is deceptive – our diet is dictated to us by huge business corporations who mass-produce cheap food, which is ‘super-marketed’ to poor and impoverished communities. Meanwhile terms like ‘guilt-free’, ‘organic’ and ‘fair trade’ are thrown around, targeting the middle and upper classes, who can afford to pay for the ‘ethical’ labelling game. When we digest food labels, we are psychologically influenced into feeling better about ourselves. We feel we have eaten healthily, organically or ‘ethically’.

Ironically, much of the food consumed by middle class whites originates from the culture of marginalised communities, re-branded to seem ‘safe’ to often xenophobic consumers. The type of food available in certain areas is linked to gentrification; in my local area in Hackney for example, local businesses are being shut down to be replaced by ‘trendy’ hipster cafes and bars often profiting from culturally appropriative menus with little respect for the local people, who cannot afford to eat there. This is linked to oppressive capitalist systems of exploitation both at home and abroad. Exploitation fuels the food industry. The UK and US manage to appropriate ‘exotic’ ingredients through exploitation of workers abroad, who cannot even afford the food they harvest. It is a neoliberal slave trade with roots in colonialism, that manipulates small farmers, not to mention engages in cruel battery farming and the slaughter of animals en masse. 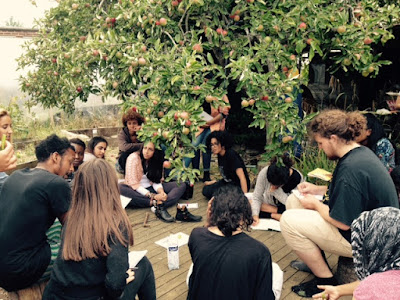 These critical discussions were food for thought and inspired the incredible writing group led by experienced poets Zena Edwards and Sai Murray. The big issues surrounding food were tackled head-on. There were no holds barred once the poets stepped into the arena! What was particularly important was that Shake! was primarily a healing space. Each day was structured in a way that involved listening to our bodies. Self-care was paramount. The effects were wonderful - as the week progressed we became increasingly barefoot as we stripped away the negativity from the outside world and began to relax into our natural selves. After our time spent in the green spaces, we would take every opportunity to be outside, making music, running on the grass, doing stretching exercises, all of which helped greatly in making us feel present and grounded. Thanks to Saara we also got to try out some yoga - while some of us may have fallen near flat on our faces in the process, the end result was a rare sensation of oneness. The mantra for this energy was repeated throughout the week - “I am here. I am healthy. I am healing. I am loved”

The week was divided by a trip to May Project Gardens, an alternative educational green space using hip hop to empower young people to live sustainably. Spending time in the gardens was an invaluable part of the creative process. The experience of cooking together, feeling the earth beneath our fingers, enriched our sense of community and our appreciation for sharing the experience. Few have the privilege of access to green spaces where they can grow their own food. Healthy, genuinely ‘fair trade’ food is expensive, unless we reclaim the means production by growing it ourselves. So massive shout-out to Ian at May Project Gardens for letting us use the space and for showing us the fantastic work you do.

The zine-making workshop run by Paula Serafini provided a great opportunity to take time out from the other workshops. This was a very visual, hands-on approach to arts activism, to me it was a showcase of raw and unfiltered responses to the issues being tackled - and the results were a zine rich with strong imagery and powerful political messages. Copies will be available soon!

This was my second Shake! and I had the honour of returning as a facilitator. My experiences from the previous course had made it clear to me how important alternative modes of education were. I was shown how much could be learnt simply by listening, and many of the issues we approached often required a great deal of ‘unlearning’, especially on topics relating to race and gender and the socio-political privileges attached to them. I felt able to grow and change as a person simply by being present. The space was open for all to contribute whilst also critical of dominant and controlling ideologies - “Tough on ideas, soft on people”. Like we observed with the plants at May Project Gardens, ‘the edges are where we grow from’ - the most powerful poetry and radical filmmaking was developed in an environment in which our ideas were challenged and we were encouraged to ‘go deeper’.

Too often we consume without being nourished, but during this very special few days I spent with such an incredibly powerful group of young artists and activists, I found my stomach filled with truly honest, organic ‘soul food’. It was an experience I will not forget and will stay with me moving forwards. In the space of only 5 days, the group managed to produce a kick-ass zine, multiple short films and some incredible poetry! But the food fight is not over – Shake! encouraged all of us to get involved in local activism and engage with issues surrounding food, which have such a major impact our communities. We will continue to campaign, create and share, with the strength and passion that we give to each other. Watch this space!
at 15:46 No comments: